The Resurrection according to 1 Corinthians 15:35–55 as Understood and Debated in Ancient Christianity

How did the early Christians understand the New Testament? Here is a brief discussion about how one passage from 1 Corinthians was understood and debated from the 2nd to the 4th centuries. In 1 Corinthians 15 Paul addresses the theme of the resurrection of Christ and of the Christians at the end of times. This presentation concentrates on the second half of this chapter, which deals with the resurrection of the Christians.
First, Paul's view of a spiritual resurrection body was hijacked by the Valentinians, to whom the Marcionites may be added, which caused a great difficulty to the Church. It is presented how several Fathers wrestled with it.
Second, our passage is ambiguous with regard to the question whether Paul had also intended non-Christians. In our passage their destination seemed forgotten. For this difficulty the Church Fathers offered several solutions. Tertullian, Origen, Didymus, John Chrysostom and Jerome gave allegorical interpretations of the different kinds of flesh and bodies mentioned in verses 39-41, in which they saw different kinds of people, including non-Christians. Tertullian held that people who are submitted to the carnal lusts of “flesh and blood” will have part in the general resurrection, but not in God’s subsequent kingdom which is destined for Christians.
Furthermore, in variant readings verse 51 was used with regard to Christians and non­ Christians. The text preferred in Nestle-Aland’s 28th edition o f the New Testament is used by Origen, Gregory of Nyssa, and John Chrysostom: “we will not all die, but we will all be transformed”. To Gregory o f Nyssa this means that in the resurrection people, whether dead or alive, will receive angelic bodies. Likewise, Chrysostom says that those who will be alive at the moment o f the resurrection, will then be transformed with those who have died already; this applies to all people. In Didymus’ reading the negation in verse 51 has shifted to the second part o f the sentence: “we will all die, but we will not all be transformed”. This implies that after the resurrection non-Christians will first have to be purified before their bodies will be transformed.
A third reading of 1 Cor 15:51 is found with Tertullian (and in the Vulgate): “we will all rise, but we will not all be transformed”. This means that all people, Christians and non­ Christians, will be raised up, whereas only the Christians will be transformed to imperishability. This reading is an adaptation to the Church’s doctrine as formulated in the Rule of Faith, which says that all human beings will be raised, either unto salvation or unto punishment.

Since 1948 the Reformed Hymnal contains a versified paraphrase o f Lamentations chapter 5, interwoven with allusions to the fate of the Reformation in Hungary. This appears to have been taken over from the Hoffgreff Cantionale of 1556 (printed in Kolozsvár, Klausenburg, Cluj- Napoca), but in fact the text of this poem is based on the 1877 edition of an old Hungarian poem. After having critically analysed alterations and deletions, and also having compared the text with the ones published in the Service book of 1574 and in the Cancionale of 1574, some textual corrections are proposed for future editions o f the Hymnal, and also endorsing to retain three of the presently deleted strophes. There is another short paraphrase of the original published by the Rev. Sándor Farkas (1851—1911) in 1883 in his edition of a Song book for Sunday Schools, the earliest o f its kind in Hungary. The melody, which is also important, was published on several occasions since 1859. Another new poem known with one of these melodies is the poem by Farkas. He also paraphrased some parts o f the above mentioned 16th century text. Nonetheless, in spite o f this established fact, his name is still missing from today’s Hymnal. His pioneer edition has still not yet received the attention it deserves in Church History and Hymnology. Now the four part harmonisation o f these melodies edited by him are compared to later editions, measured musically, thus taking a first step towards restoring the data and commemorating the editor’s name.

Diaspora-concepts in Contemporary Theologies of Mission

Calvin wished to change the structure o f his first catechism (1537/1538), which explained the Ten Commandments before the Apostles’ Cred. Having recognised that his first catechism was too difficult for children, Calvin rewrote his text. He arranged the Geneva Catechism (1542) in questions and answers in an effort to simplify doctrinal complexities. His second Catechism displaced all other Reformed catechisms until 1563, the year when the Heidelberg Catechism appeared. In 1563 the bishop o f Debrecen, Péter Méliusz, translated the Confession o f Geneva into Hungarian. The text was also translated into Italian (1551 and 1556), Spanish (1550), English (1556), German, Dutch, Greek and Hebrew. The second Hungarian translation was made by István Zilahi in 1695 and was edited by Miklós Misztótfalusi Kis. Finally, in 1907 Sándor Czeglédy prepared a new translation o f its text. The La maniere d ’interroger les enfants qu’on veut recevoir a la Cene de notre Seigneur Jésus Christ and Das Genfer Konfirmationsformular von 1553 are very important catechetical instruments.

Occupiers and Occupied Ones. World(view) and Nation(al) Policy in the Peoples’ Republic of Romania (1958–1965)

In 1956 Bishop László Ravasz expressed his views on church policy and the general situation of religious communities in Eastern Europe before the meeting of the Central Committee of the World Council of Churches in Galyatető, Hungary. His text was conceived as “advice” addressed to the members of the Bethany Movement. My paper’s main target is to contextualise and publish this interpretation regarding the relationship between Christian Churches and the communist state.
In 1958 a major turning point appeared in the church-state relation on both sides of the “Iron Curtain”. After the Lambeth and Nyborg Conferences, Western openness and diplomatic efforts led to the enlargement of the World Council of Churches (New Delhi 1961), gathering Protestant and Orthodox Churches in the communion of prayer and work. At the same time, Nikita Khrushchev’s totalitarian attempt to annihilate religious structures in the Soviet Union was concealed behind his apparent “disposability for dialogue”. By organising the „Christian” Peace Conference (Prague 1958), the Kremlin continued “destalinisation”, promoting, in fact, Stalin’s policy of apparent peace in the East-West relations, while the political police went on destroying the Church and the aim it was created for. The new abuses were justified by the slogan of “Leninist legality”. Trying to find the Romanian way to build communism, Gheorghe Gheorghiu Dej, the old-new party leader and his subdued judicial system brought religious faith in the prisoner’s box. Persecution focused especially on religious minority groups, such as Catholics, Reformed, Unitarians, Lutheran Evangelicals, Pentecostals, Baptist, and others, but, also, attacked the majority Orthodox monastic life. During the show-trials, the fictive scene became a sacrificial place, where those who were searching for the truth of God fell prey to the injustice of the immolators who imposed by force their atheistic “truth”.
The National Council for the Study of the Securitate Archives (CNSAS) has been preserving detailed data, descriptions of the facts and nuances concerning thousands of aggressors and victims of (post-) Stalinism. Emblematic was the case of Richard Wurmbrand, who first suffered imprisonment (after a sentence pronounced in a Kangaroo Court), being released afterwards by the authorities in 1964, for an amount of 10 000 USD.

The views of Sándor Karácsony about religious education can be clearly discerned from his writings. The main task of reformed pedagogy is to activate continuously the divine notions in this continuously changing world. Protestant teachers must accomplish their daily work according to the Gospel of Christ. The Hungarian Reformed Church was a so-called “church of schools” for hundreds of years. This means that even between WWI and WWII it owned more schools than churches. The number of Reformed schools is significant even today. Sándor Karácsony claims that only Reformed people and communities are able to maintain Reformed schools by people who “are ready to serve and sacrifice themselves” for this cause (Karácsony, Sándor: A magyarok Istene. Széphalom Könyvműhely, Budapest 2004, 172).

In Dialogue with God Behind the Scenes

Wayne Morris: Salvation as praxis. A Practical Theology of Salvation for a Multi-Faith World 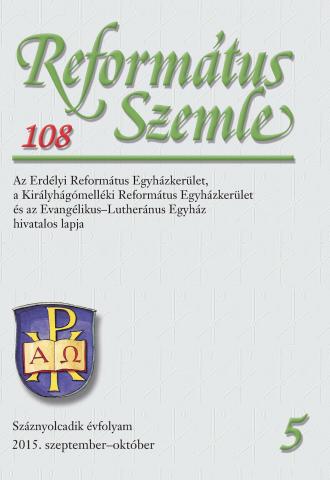