Resurrection is one of the central topics in Christian theology, widely discussed within both christology and anthropology. This idea deriving from the New Testament is deeply rooted in Old Testament texts, or, more precisely, in a particular interpretation of those texts. However, this later approach of the New Testament and contemporary Judaism to Old Testament passages speaking about resurrection raises significant questions for current Christian readers who, on the one hand, are familiar with the historical-critical reading of the Bible, and, on the other, strive to be faithful to their tradition. This paper seeks for answers concerning the discrepancy between a responsible exegetical enterprise and the fidelity towards the ecclesial tradition. It maintains that the current reader needs to distinguish between the statement of Christian theology (“the Lord has risen”) and its argumentation (based on Old Testament references). The statement is primarily rooted in the personal experience of eyewitnesses, while the argumentation bears all signs of contemporary time bound hermeneutics.

This lecture endeavours to answer the following questions: In what sense was the 500th anniversary of the Reformation different from any previous celebrations? What is the relationship between modernity and the Reformation? Does the Reformation have a formative role in the contemporary society? This study breaks with the traditional and linear interpretation of modernity and offers reverse methodology. Starting from the vantage point of the modern society, it examines the religious and theological impulses, and those interfaith dynamics that can have a role in shaping/modelling a peaceful coexistence of cultures and religions. These impulses are: the necessary interaction between various branches of science and religion in the academic setting; the value of the spiritual/theological interpretation of reality in our society; the freedom of conscience and religious thought in the secular state and in the church; and the preservation of self-identity in the age of mass manipulation. Pondering over these issues can and will make our celebration more relevant in the contemporary setting.

A Portrait of John Calvin Reflected in the Hungarian Reformed Intellectual Class’ Correspondence, Personal Book Memoirs and Diaries of the 19th Century

The consolidation of the entire law system of Hungary during the 19th century (e. g. laws of 38/1868, 34/1874, 43/1895, and 33/1896) created a brand-new alliance between Austria (ruled by the Habsburg-house) and Hungary, which paved the way for the practical fulfillment of the Kiegyezés (Compromise / Ausgleich) in 1867. This special legal situation influenced not only the everyday life but also the higher educated levels of the so-called “Reformed Church of Hungary”. In this sparkling intellectual sphere, several essays, books, and cyclopedia were published related to the history of the Reformation and the life of John Calvin. Among the pieces of this irretrievable literary heritage, the collection of Calvin-biographies (1864−1906) written in Hungarian bears a distinctive role. In spite of the rich history of Hungarian Calvin-research, the several portraits of Calvin illuminated by these biographies have not been examined until now. Among the prominent representatives of the Hungarian Calvin researchers, Imre Révész did the first substantial contribution to the opening of the closed world of Calvin’s collective memories in Hungary. One of his best-known books was the Life of Calvin (1864). It was the first biography of Calvin published in Hungarian. However, Révész’s evaluation of Calvin’s personality and his role for example in Servetus’ death caused a long-standing debate in the published and the unpublished works of Calvin-researchers as well. Namely, Révész and his famous follower, Ferenc Balogh (1864), believed the reformer was “quite innocent” in the death penalty of Servetus, but their literary “opponents”, for instance Ferenc Szilágyi (1864), Pál Schneider (1877), Károly Szász (1878), Lajos Warga (1887), Ferenc Kanyaró (1891), and Jenő Zoványi (1908), depicted Calvin as a bloodthirsty tyrant, dictator of Geneva who persecuted intellectual freedom entirely.

The Festive Meeting of the Common Synod of the Hungarian Reformed Church, 24 July 2017 (redacted by Zoltán Adorjáni) 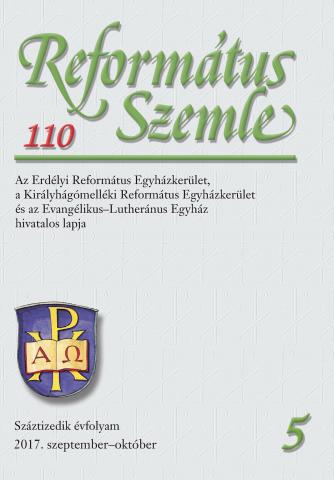