Aspects of Pauline Eschatology in the Context of Hellenistic Funeral Inscriptions

In this paper we present almost twenty ancient greek funeral inscriptions from the period of 4th–3rd centuries BC and 3rd–4th centuries AD. Our aim is to set the eschatology of four Pauline letters (1Thessalonians, 1 and 2 Corinthians and Filippians) in the context of Hellenistic after-life concepts, and to establish the possible parallels and analogies. We hope that through this attempt we could understand better, firstly the „belief-package” of Hellenistic Christianity, secondly the situation of Christiam message in the context of Hellenism, and finally the shaping of Pauline eschatology.

The Absolution: Understanding is Forgiving

This paper examines the issue of absolution by Vladimir Jankélévitch. The absolving party’s role is to discover the cause external to man, deep down beneath human malice, which motivates the criminal actions. With an investigator’s zeal, an answer is sought to the question of “unde malum”? The old answer comes from dualism: the negative transcendent force, Satan, is the source of all sins. If there is an explanation, sin is mitigated and rage is attenuated, therefore explanations must be found. So one needs to explain – and this absolves one from all obligations of forgiveness. But this method fails the three requirements of true forgiveness, too: it is not an “immediate” “event”. It does not involve a personal relationship between the perpetrator and the injured. The offender is not offensive – at the very most, he is ill or illadvised, but there are no bridges from here to the other side of the abyss, where there is an obligation of love. Absolution is painless, but forgiveness is a heart-breaking, painful sacrifice. However, there is always something behind the intention of absolution which is ultimately similar to forgiveness and love: our author calls it a surplus of energy. The state of the soul is not the same when it seeks exempting or aggravating circumstances.

Another substitute for forgiveness treated by Jankélévitch is the thoughtless purging of the crime committed and its destruction. The author does not use Freud’s concept of suppression, but essentially that is what he is about: throwing the case file into the fire and “never speaking about it again”. According to Jankélévitch, this misleading, abrupt gesture, which sends the message that nothing happened, primarily lacks the third characteristic of true forgiveness, the personal relationship between the parties. The relationship between the victim and his tormentor remains superficial, mere window-dressing, if they fail to work through the most sensitive questions, if the former fails to strive to show mercy, love and forgiveness so that the requirement of truth is left intact.

The Apology of János Zilahi Sebes. A Source Edition

The attack against the ideas of illumination was the last desperate attempt of the Transylvanian reformed orthodox theology at the Synod of Küküllővár in 1791, when János Zilahi Sebes and János Bodola were indicted for spreading the teachings of arminian, socionian and pelagian theology. He defended himself in an exhaustive testimony and also defended the book of the German reformed professor, Samuel Endemann, used in Transylvanian schools as a manual of dogmatic theology.

László Musnai, pastor and theology professor. His work and activity can not be listed into one specific theological area. Considering his basic qualification, he is a New Testament scholar, on which field he has written his phd thesis. But if we look at his other books and publications we can say, that he is as good in Bible-translating or in church history, as in biblical studies. As far as his social and educational activity is concerned, he was a prominent church leader and appreciated teacher as well. So, he did not isolate himself into the ivory tower of science, but took an active part of the everyday life wherever his calling brought him to. With a vast life and scientific experience he was wholeheartedly committed to the Hungarian Reformed Church in Transylvania in general, and to the Gábor Bethlen middle school in particular. His example should be a guiding star for each of us.

Béla S. Visky: The Cross of Philosophy. The Problem of Forgiveness in the Moral Philosophy of Vladimir Jankélévitch

› Other › collection of studies, Buzogány Dezső

The New Internship Program and a Meeting with the Mentors

A Laudation of Dr. Dezső Buzogány on the Occasion of His Reception of the D.H.C. Title

The Possibilities of Ecclesial Historiography. The Birth of the Institutional Research on Church History 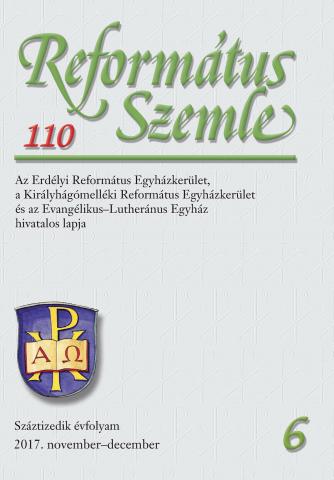