The Background and Message of the Grammatical Solutions of Lk 24:31 and 2 Tim 4:17

Luke 24:31 relies on 2 Kgs 6:17. The terminology used in the Syriac Peshitta Old Testament translation and the Greek Septuagint can be recognised behind the Syriac Peshitta and Hebrew New Testament translations. The morphological forms are passed on to the New Testament via the mediation of the Septuagint, although the verbal forms also expose the knowledge of the Samaritan Pentateuch. The intertextual relations of 2 Tim 4:17–18 suggest that this text is a summary of the entire Pauline corpus and, in a certain sense, the entire Scripture as well.

"Now, when we see vices, there is no plague more deadly". John Calvin on Homosexuality and Sodomy

John Calvin transformed the theology and law of sex, marriage and family life. Building on a generation of Protestant reformers, Calvin constructed a comprehensive new theology and law that made the conclusion and dissolution of marriage, the nurturing and welfare of children, family cohesion and support, sexual sin and crime essential concerns for both church and state. He drew the Consistory and Council of Geneva into a creative new alliance to guide and govern the reformation of the intimate domestic sphere. Calvin and his colleagues applied and adapted this new theology in hundreds of marriage and family-related lawsuits that were passed before the Consistory each year. „He set out his theological and ethical reforms in rich number of sermons, commentaries, and systematic writings” (John Witte). Despite the efforts of the Consistory and Council of Geneva, there were numerous cases of homosexuality, paedophilia, sexual assault, and bestiality, which made Calvin constantly anxious. He believed, if magistrates do not punish sexual crimes (e.g. adultery, fornication, sodomy), “a door will be thrown open for any kind of treachery, for poisoning, and murder, and robbery” and “Paul therefore denounces punishment not only on adulterers, but also on fornicators, for both depart from the holy institution of God”. For this reason, Calvin admitted, it would be good to drive out such public fornicators from the city in order to avoid scandals and to keep them from abusing themselves by fornication. Calvin’s legal and theological standpoint was: there is a greater danger in not punishing the crime or hiding the punishment, than in exerting a public and exemplary punishment with the aim of prevention. This is why the Genevan Council applied death penalty so often. But Calvin continued to preach about the Grace of God day after day.

The aim of the paper is to trace a historical line of how the Unitarian ministers were trained at the Unitarian Theological Seminary of Kolozsvár. The first part shortly presents the most important stages of the Seminary beginning with the 16th century. The second part discusses the role of the newly elected Unitarian professors of the Seminary in the Transylvanian Unitarian Church especially during the beginning of totalitarian regime.

Timothy Keller: Preaching. Communicating Faith in an Age of Skepticism

József Székely has received his PhD 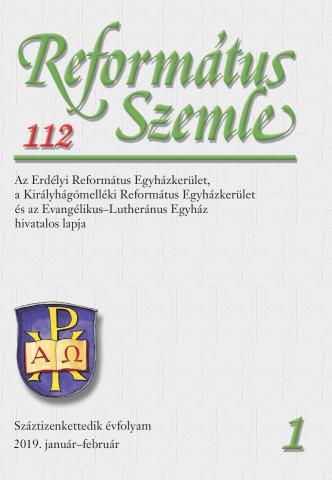