This is a Hungarian translation of the tractate Chagigah from the Babylonian Talmud. The Talmud emerged from the Mishnah. Our translation is based on Koren Talmud Bavli, The Noé Edition, Moed Katan, Hagiga (commentary by Rabbi Adin Even-Israel Steinsaltz), a Hebrew/ English Edition published by Koren Publisher, in Jerusalem (2014). In contrast to its name, this tractate’s central theme is the sacrifices brought for the festival days. One of those sacrifices is the peace offering of joy. The Jewish believer is endorsed to be joyful before his God when he appears before Him in his sanctuary.

The present study examines from the perspective of dogmatics Eduard Böhl’s book entitled Christologie des Alten Testamentes oder Auslegung der wichtigsten Messianischen Weissagungen published in 1882. The study deals mainly with the introductory chapter. E. Böhl, professor of Reformed Systematic Theology at the Protestant Theological Faculty in Vienna from 1864 to 1899, was strongly influenced by the theological vision of H. F. Kohlbrugge (1803–1875), a Reformed pastor from Elberfeld, Germany. As a systematic theologian he followed the orthodox Reformed position which emphasised the inseparable unity of Scripture. From this hermeneutic stance he defended the Christology of the Old Testament. Böhl testified that God in Christ, in fact, repeated, confirmed, and accomplished on a higher level what had happened in the lives of Old Testament confessors. Old Testament writings legitimize Jesus’ coming, incarnation, salvation, suffering, death, and resurrection. The essence of Böhl’s standpoint is that some of the messianic texts do not refer directly to Christ, but above all to “types”, figures who carry the promise of salvation. Other parts, however, such as the psalms discussed in detail in his book, are unequivocal pieces of evidence of the promises of the Messiah who is embodied in Jesus Christ. In support of his view, he cited “the exegesis of the New Testament,” the apostles and evangelists, and the Targums, the Book of Enoch, and the Talmud among the Jewish religious literature. With his theological vision and writings, through his Hungarian disciples, Böhl exerted a decisive influence on the Reformed theological thinking and the New Orthodoxy in Hungary. This theological trend took up the fight against the spread of theological liberalism with its centre in Debrecen during the second half of the nineteenth century. Böhl, as a defender of traditional Calvinism, was a sure point of reference with respect to important theological issues.

Humanism in the service of theology (V.)

This overview of Melanchthon’s dialectic is far from being complete. He continues to present the rules of scientific thinking and the theoretical and practical methods. But the short survey, which covers the essence of his scholarly view, shows a clear intention and effort on his behalf to “domesticate” the classical (pagan) science of thinking in view of their adoption by the Protestant churches.  He believed that by doing so, he was advancing the science of the Word, as far as the preparation to the church service is concerned. He was aware that the classical scholarship of humanism could improve Protestant theology, which was to become more erudite, while enriching church sermons with more depth and substance. The overview also shows Melanchthon’s deep commitment to pedagogy, and his concern to be useful to both his students and pastors by elaborating on and strengthening the specific Christian theology of the century. By this he inscribed his name forever into the memory book of the Protestant science and pedagogy.

In this paper I present a thorough examination of Laszló Ravasz’s publications from the period 1901–1903, when he was a student of the Protestant Theological Seminary and the State University of Cluj/Kolozsvár. In this period, he shows signs of uncertainty whether to become a Reformed minister or a journalist, novelist, or critic. This period of life of a student is typically characterised by an interest in almost everything. He writes more than forty poems, short novels, theatrical critics, but most often he relates about the student life in the magazine Kolozsvári Egyetemi Lapok. He attempts to follow well-known journalist of his time. His descriptive writings demonstrate how good a writer he was already in the early years of his career.

Michael Frost – Alan Hirsch: The Shaping of Things to Come: Innovation and Mission for the 21st Century Church 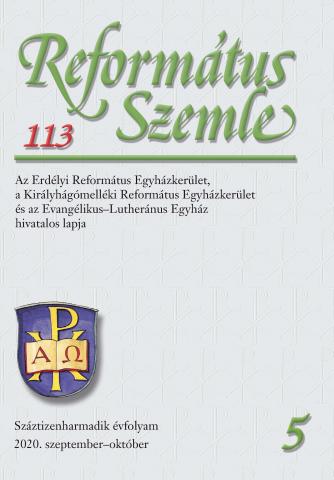