Did the Jews engage in missionary activities in the New Testament era? Since most of the first Christians were of Jewish background, with their centre in Jerusalem, and considering the relevance of missionary activity in early Christianity, this is a highly significant question. Before the ministry of Apostle Paul, Christians of (primarily) Jewish origin were those who defined the circle and practice of potential followers of Christ. For this reason, it is crucial to identify the motivations of the continuously intensifying and purposefully mission-focused efforts with regard to the Gentiles. Could this dynamic be rooted in the missional character of Judaism towards the non-Jewish people?

Our research shows that (a) Judaism had not become a religion deliberately focused on missionary activities during New Testament times. They did not initiate missionary efforts since they were not convinced to have been their duty from JHWH to convert non-Jewish people to Judaism. (b) However, the Jews were aware of their election, and believed that, as a consequence of this, they needed to proclaim – by exposing their faith and ethical lifestyle – JHWH’s rulership to everyone. They knew the prophecies about the future that the Gentiles would eventually turn to JHWH as the only God and King of the Universe and would worship Him together with the Jews. (c) The Jews opened possibilities to the Gentiles, who felt attracted to their faith, to get closer to Judaism. Those who had shown stronger commitment came to be accepted to (on different levels) and integrated into the Jewish faith community.

Furthermore, during the New Testament era, the Jewish national existence was under threat by the Roman Empire. This urged them even more to popularise their faith in order to secure their national subsistence. This dynamic shaped the spiritual and cultural background of the ever-increasing intentional missionary efforts of the Early Church towards the Gentiles.

“After I am worn out, shall I have pleasure?” (Genesis 18:12). Church nursing homes today – Diaconal institutions turned into old people’s homes

In a world of broken traditions where deaconesses are no longer existent, the culture of nursing has changed: it has become devoid of sacredness. Could church nursing homes find a way to revive any of the lost tradition? Could the teaching of Christo-centric diaconia be applied to the practice of nursing homes today, or is it merely an area for theological research? Focusing on everyday life in nursing homes, this study carefully considers the challenges of pastoral work, e.g., holding worship services for those suffering from dementia, and attempts to find a way for nursing homes to become God’s workshops and God’s households.

Lajos Erőss’ and Karl Barth’s approach to comparative theology. Two attempts to reflect on the relationship between Buddhism and Christianity especially in regard to salvation

This work presents concisely the theological statements of a Swiss and a Hungarian theologian, Karl Barth and Lajos Erőss, regarding Buddhism. Both theologians belonged to the trend of orthodoxy in their respective countries. While they lived and worked in different contexts of space and time, nonetheless both strongly opposed the view of liberal theology that Christianity was merely one of the many world religions. Erőss and Barth dealt with comparative theology of religions within the framework of systematic theology, but they never accepted the conclusions of liberal theology. In this study, first I introduce Erőss’ life and work and briefly examine his opinion about Buddhism. Then I analyse Barth’ view about Japanese Zen Buddhism, especially with regard to the objectivity of his standards of comparative religion. The study critically reflects on how Christian dogmatic approach was applied by the theologians while they investigated other religions’ relation to Christianity, especially when the tenants about salvation was studied in those respective religions. The paper argues that Barth was able to transcend his theological mind up to a certain point yet bent his conclusion always towards his strong theological predetermined opinion which made him famous.

The Sources of the theological liberalism of Albert Kovács (1838–1904)

The sources of Albert Kovács’ (1838–1904) theological freedom must be analysed in order to understand his theological thinking and determine his place in liberal theology, especially on the wide palette of its Hungarian representatives. In this study, I explore the origins of the influences that impacted him in his childhood, during his theological studies in Transylvania and abroad, that could have shaped his thinking. His childhood years in Mezőbánd were characterised, on the one hand, by the devotion of his family towards the church and, on the other hand, by the indelible imprint of the declining ecclesiastical crisis. During his school years, he became acquainted mainly with the ideology of rationalism, which laid the foundations for his later liberal theological orientation. During his studies in Utrecht and Göttingen, he encountered liberal, mediating and orthodox positions. Upon his return, he came under the influence of the radically liberal Mór Ballagi (1815–1891). Although this clearly set him on the liberal side, his orientation did not preclude the use and application of ideas taken from representatives of confessional theological schools that he has got acquainted with abroad.

Tradition and progress. Some thoughts of an aging young man on the 100th anniversary of the Christian Youth Association 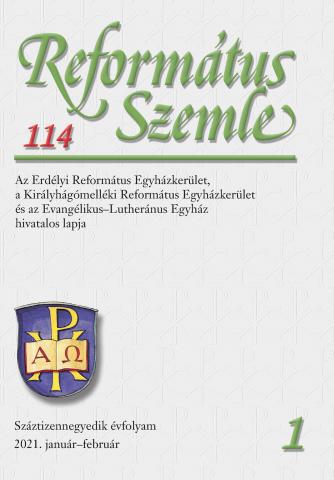