Canaanite Abominations as Presented in the Book of Deuteronomy. A Theological Evaluation. Before entering in the Promised Land the people of Israel were told not to follow the forbidden practices of the polytheistic nations (Deut 18, 9–14), to avoid all kinds of magical and superstitious practices designed to discover the will of gods, or even to compel the gods to action in certain ways. The occult, superstitions, divinisation, sorcery, spiritualism were abominations all to Yahweh and brought about His judgment. Yahweh made His will known through revelation, by the aid of His prophets, whose words would be clearly understandable to the people in contrast with the ambiguous and mysterious spells of those who worked with magic and divinisation. Israel must be blameless in regard to every form of divinisation, magic or spiritism. In our day when we can see the rise of a „new paganism”, moreover when spiritualism, astrology, teacup reading and the like are widely practised, these injuctions given to ancient Israel have a particular relevance. This presentation is trying to understand the present will of God with the guidance of the Holy Spirit, to tell the difference between religion and revelation. A short survey is being made to define the aspects of Israelite religion, a product of revelation through the prophets of Jahweh in contrast to the religions and magic void of revelation. The exegesis of the biblical passage from Deut 18,9–14 enables us to search to the different forbidden Canaanite practices. Some attempts are being made towards a possible new translation of the words denoting forbidden practices. The will of God was to be discovered by a prophet and not by a magic worker, a diviner or a spiritist. Israel has to observe the guidance of Yahweh, who will provide a succession of prophets until the day when He will send them the Messiah, the eschatological Prophet Jesus Christ, His Son – who will save His people from damnation. He has the words of eternal life. Jesus asked the twelve: You do not want to leave too, do you? Simon Peter answered him: Lord, to whom shall we go? You have the words of eternal life. (John 6,67–68)

The Interpretation of The Epistle to the Colossians 1,1–11. These verses form the introduction to the Epistle containing the heading, the address, the greeting (vs. 1–2.), the thanksgiving (vs. 3–8), and the prayer of intercession (vs. 9–11.). The present essay belonging to the genre of Bible interpretation is going to be the first part of a commentary on this book. The reason for my having started elaborating it is that in the last thirty years no scientific interpretation on the book was published in Hungarian. This is why there is a need to sum up the results of research published in theological literature. As the authorship of the book is concerned, we assume the point of view that the epistle had been written by Timothy at Paul’s request and under his guidance. Accordingly the epistle took its origin in the last period of the apostle’s life, possibly during the Roman captivity. This is the explanation of the fact that both in form and theological point of view it is close to Paul’s other epistles. The interpretation follows the classical scheme of division: translation, analysis of form and exegetical commentary. As methodology is concerned the interpretation blends the historical-critical and the theological approach. The aim of the author is to point to the historical and congregational situation in which the epistle took its origin and to reveal those thoughts and ideas that were formulated about the life and faith of the christian church. As the Epistle to the Colossians sprang up in a certain given context as the history of religion is concerned, it is necessary to show the way in which the author of the epistle reflects upon the religious-philosofical influences, stressing the specific character of Christian teaching.

The purpose of the Epistle to the Hebrews. In this essay we argue that the particular purpose of Hebrews is obscure for the modern reader. It is clear, that it was addressed to a particular community that needed to be warned not to apostatize, not to turn away from Christianity. But no dogmatic conclusion can be reached on a more precise identification of the danger could consist in. The drift of the argument on the levitical cultus, the exhortations and argumentations from the exposition of so many Old Testament passages would possibly give weight to the theory that the danger was that of relapsing into Judaism, a theory held by numerous scholars. However, this is an inference, though reasonable. But each further step in order to identify the exact form of the apostasy to Judaism will be conjectural. What we can tell from the thoughts expressed in the epistle is that the author wants to reassure his recipients in their faith, to inspire them by pointing to the HighPriest Christ, and to reinstate them in the characteristic Christian features of their faith, warning them of the immeasurable loss in case they would give up their belief in Christ.

The Impossibility of a Second Repentance in the Epistle to the Hebrews. We have argued in this assignment for an interpretation of the impossibility of a second repentance, which is neither entirely psychological, nor is to be understood and complemented by inferences from Greco-Roman patronage, but it is an inherent impossibility, having in its background a theological argument: so splendid is the revelation of God in Jesus Christ, that turning away from it in apostasy is a way that excludes any chance for a second repentance.

By the Sound of a Great Crowd. In this short writing our purpose is to examine the problems of translation and interpretation of Jeremiah 11,16. In this biblical verse the word hmlh has many possibilities of translation. After a short presentation of the biblical background I will examine the Hungarian, English, German, Dutch, French, Greek and Latin translations of this biblical verse, and finally I will present my own translation. At the end of this paper I am going to draw a parallel between the meanings of this image in the Old and New Testament. The Hebrew dictionaries given many meanings of the word hmlh: roaring sound, tempest and crowd. The LXX renders the word hmlh by circumcision, which is grammatically impossible. Hieronymus translates it with loquella, which means speaking. In Calvin’s Latin translation we read sermo, and in an additional note tumultus. In the German translations we can read große (Kriegs-) Getöse, ein großes Geprassel, Mordgeschrei. In the French translations we read about un bruit fracassant and au bruit d’un grand fracas. The Dutch versions translate it either by tempest, or by een geluid van een groot geroep. The majority of the English translations keep the ambivalence of the text, translating the word hmlh with tumult. But Robert Davidson translates it by tempest, and in other less known English translations we find: But I will set you on fire, fire that will blaze with a mighty roar – He has set fire to it, and its branches are consumed with a great roaring sound. Finally I have suggested the following translation: By the sound of a great crowd He has set fire to it. According to this translation the meaning of this biblical passage is changing as follows: the secret sin will be followed by a public punishment – As the thief is shamed when he is discovered, so the house of Israel is shamed (Jer 2,26). As a New Testament parallel we should read John 15,1–8.

A Makar(i)ological Introduction to the Book of Psalms. The Notion of Happiness as 'ashrey in the Book of Psalms. The title of this short study is a double allusion: partly to the character of notiondefinition – not so much the scientific purpose as the biblicity is emphasized by using logical as an attribute – and partly to the viewpoint of text-interpretation – the makar(i)oticity of the Psalms-analysis. Nevertheless, the compiler does not offer more than some introductory remarks, suggesting further reflection upon that variously designated something, which concerns everybody and which is most commonly understood as “happiness”. 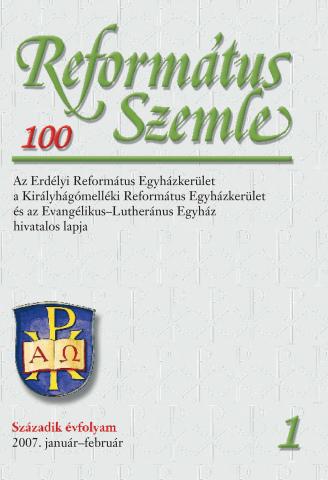